Ivrea is essentially an idea.
A century of history from which to take off and fly.

In the last century Ivrea and the Canavese region were the scene of a novel social experiment that aimed to change the world utilising a perfectly suited tool for the task, namely the factory. Adriano Olivetti assigned a new task to his company, namely to contribute towards building a people-friendly society. Thus his “factory of goods” became a “Factory of Good” that not only dispensed products and salaries, but also social services, culture, democracy and beauty. This commitment went on to become his key to international success.

From the “legendary” red-brick building built by Camillo Olivetti in the late Eighteen-hundreds, the buildings continued to multiply as the business grew, starting with four major evocative architectural additions built in a spirit of harmony, light and transparency. Now the time has come to push the envelope and build the “Quinto Ampliamento”: that exquisitely intangible ideal of renewing businesses, work and territories.

There is indeed a visionary way to do business and Ivrea still bears the marvellous hallmarks of that, making it a prime candidate for classification as a UNESCO World Heritage Site as the “20th Century industrial town”. But we need to interpret these hallmarks, decode them and lay them out on a map for anyone in search of new directions. In Ivrea, the future lives entrapped in the past. “Quinto Ampliamento” seeks to set it free by contributing to convert this substantial inheritance into a stimulus for change and a source of inspiration. Ivrea is already an attractive destination for companies that are questioning the sense of their choices, but it could become something even better, a Communal Economy professional training and university Hub and an incubator for new businesses, and all within the architecture of the Olivetti-era. 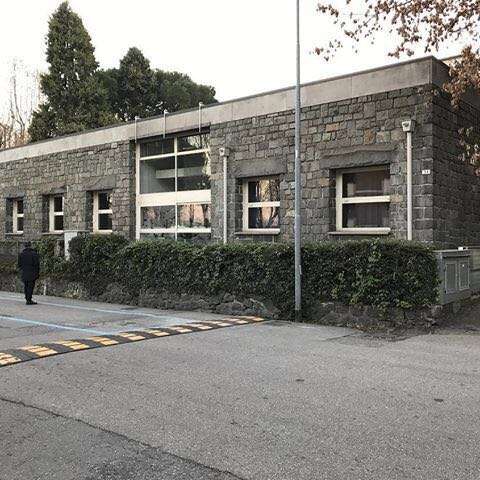 Yet another design conceived by architects Figini and Pollini and yet another project aimed at improving the relationship between the company, the workers and their families: the crèche was built between 1939 and 1941 in the vicinity of the ICO workshops and was located within easy reach for working mothers.

Single-storey and clad in squared-off stone blocks, the building nestles against a small hill that is used as an outdoor playground (at the top of the hill there is a swimming pool and some sandboxes, as well as a lawned play area and service porches).

Indoors, the classrooms face out onto a patio area and the remaining space is taken up by changing rooms, the refectory, bathrooms and an indoor playroom.

In 1952, and once again designed by Figini and Pollini, a paediatric clinic and consulting rooms were added within the complex, but separate from the main building. 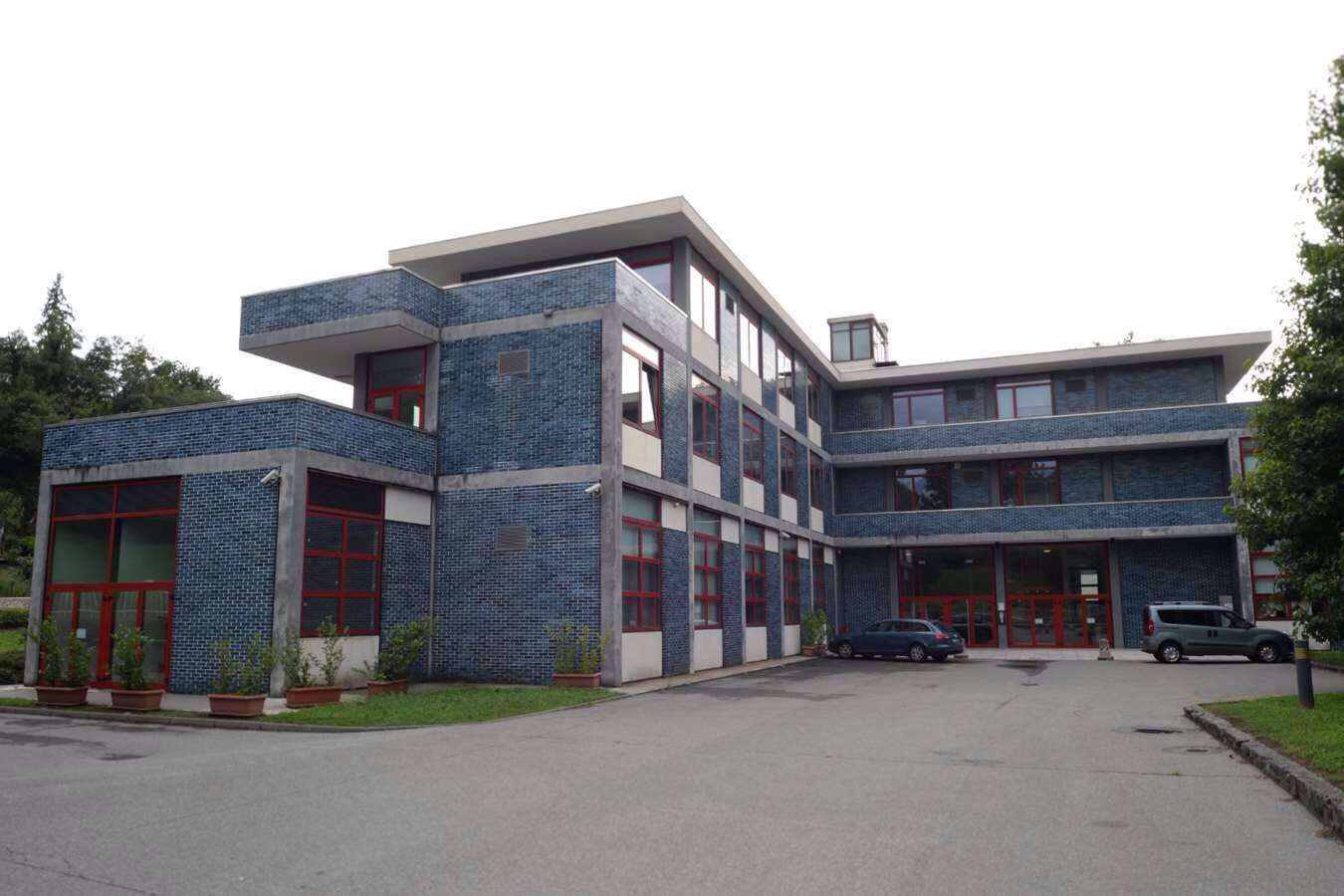 In the early Nineteen-Fifties, Olivetti was expanding rapidly.  Sales had gone through the roof, but in order to retain its market share and constantly improve its products, the Company needed a place to do ongoing, top-level research and development.  So Adriano Olivetti decided to construct a dedicated Research and Development facility that would be totally separate from the production plants.

While work was continuing on the expansion of the workshops in Via Jervis, a young architect by the name of Eduardo Vittoria, who was inspired by the work of Frank Lloyd Wright, was commissioned to design the new Research and Development Centre to be located the area directly behind the Via Jervis workshops.

The new building, which is testimony to the importance that Olivetti assigned to innovation and cultural vivacity, was subdivided into four branches, each of which was dedicated to research and development relating to a different line of products.

Located a short distance away from the production facilities, the Research and Development Centre was also somewhat different from the traditional industrial buildings in terms of look.  With its terraces, alternating open and closed spaces and blue-clinker cladding (this was the first time that any colour had been used on the company’s construction sites), the building, which was inaugurated in 1955, stood in stark contrast to the surrounding environment, which was dominated by the green of the countryside and the sober lines of all the other Olivetti buildings.

Innovative in every way.

Everyone in Ivrea knows it simply as “the red-brick factory”, however, this staid looking building has a historic significance that is far deeper than its simple appearance would indicate.

Designed and built in 1896 to house one of Engineer Camillo Olivetti’s earlier businesses, in 1908 the building became the headquarters of Eng. Olivetti and Company, the first National typewriter manufacturing company.  Truly the cradle of what was to become a great future enterprise.

The building, strategically located near to the railway station and therefore easy to get to, is the result of an expansion project that involved the addition of two new wings to the main part of the building in 1899.  Although it shows no evident external signs of architectural innovation, this was one of the earliest examples of reinforced concrete industrial buildings in Italy.

Via Jervis and the ICO workshops

Via Jervis and the ICO workshops 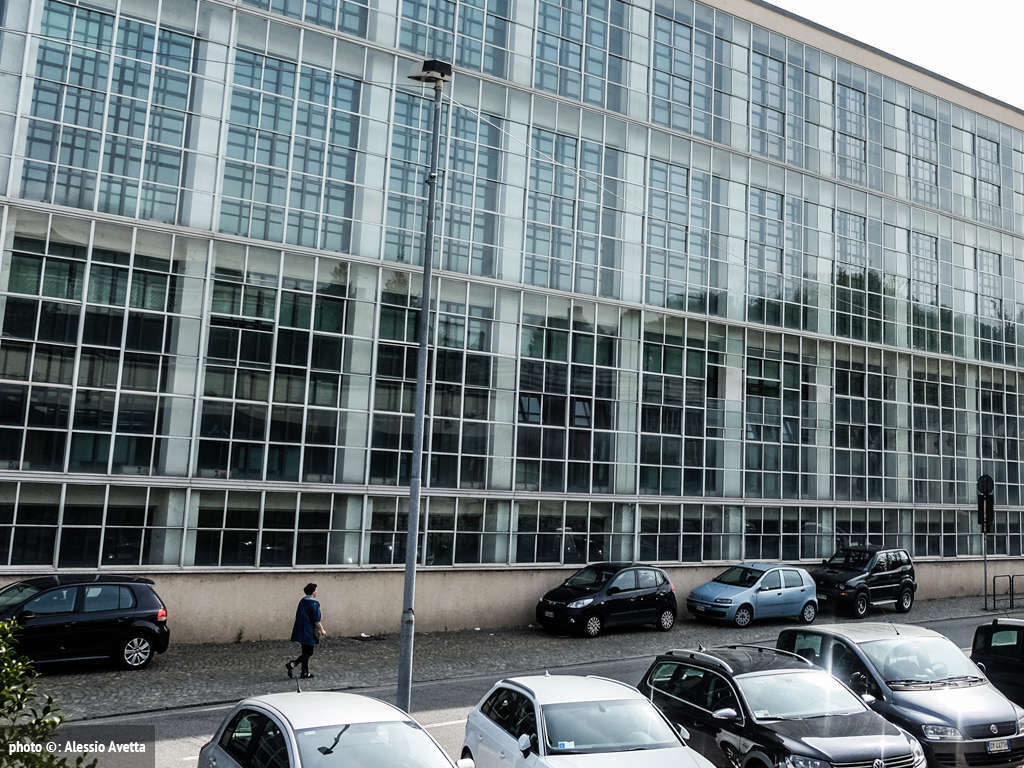 Along Via Jervis is where the ICO workshops and the Olivetti dream stand together, side by side. The architectural set that – quite obviously united – lines the southern side of the road is a symbol of the coming together of Adriano Olivetti’s innovative entrepreneurial vision and the somewhat rational modern-design vision of architects Figini and Pollini.

The collaboration between these three men – renewed a number of times and during various periods between 1934 and 1957, always with identical intent and dependant on the company’s growth and fortunes at the time – also resulted in what is one of the most significant examples of European industrial architecture.

Over the years and over the course of the various subsequent expansions that have made Via Jervis what it is today, the design and creation of the spaces has always gone to great pains to marry the technical and organisational requirements of the production processes with the psychological needs of the people who worked in them.  Thus, in an avant-garde spirit, the spaces were designed to be on a human scale, with adequate lighting and ideal for workers.

Particularly significant in this regard is the solution adopted during the third expansion, which culminated in the extension of the building for a distance of 130 metres along the road, undertaken between 1939 and 1940.  A double-glazing system with a space between the window panes into which special panels were inserted designed to filter the incoming sunlight, thereby ensuring that the spaces remained bright while optimising the thermal equilibrium of the structure. 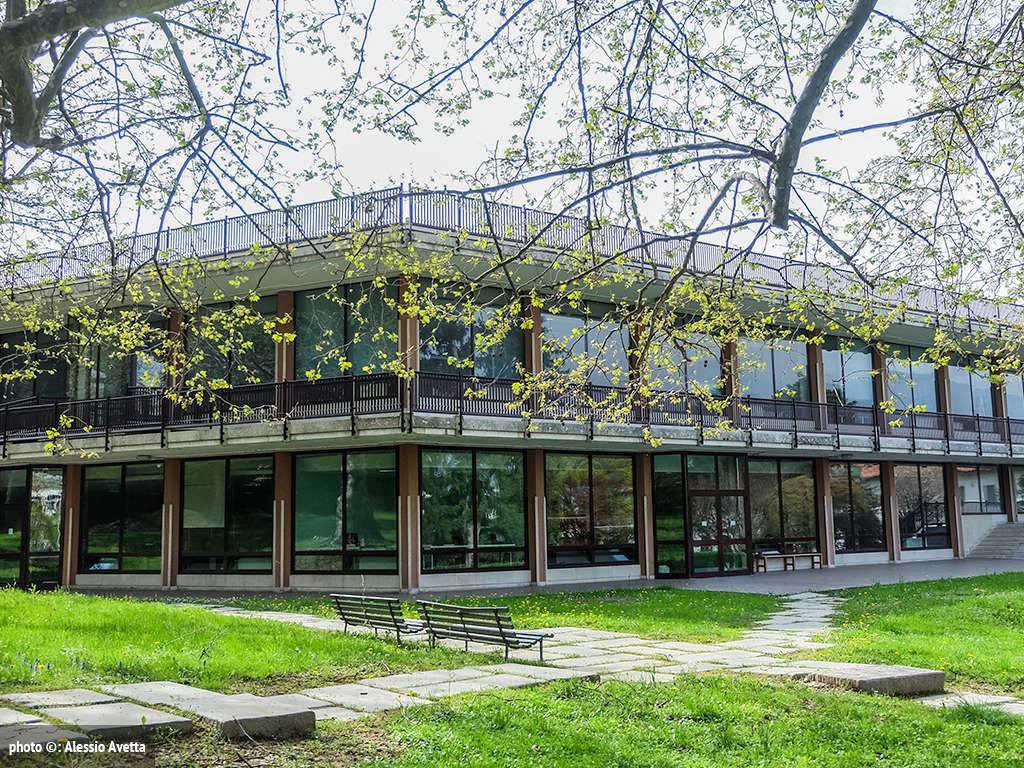 This is one of the symbolic buildings of Ivrea’s Olivetti complex.  The cafeteria and after hours centre - designed, built and altered between 1953 and 1961 under the auspices of Ignazio Gardella – fit perfectly within the company’s broader corporate, cultural, architectural and social plan that represented Adriano Olivetti’s tenure as head of the company.

Physically connected to the Olivetti factories by means of an underground walkway (created in 1955), with its hexagonal layout the cafeteria fits in perfectly with the shape of the hill, blending in with the rocks and merging seamlessly into the surrounding natural environment, which fearlessly reveals itself unashamedly through the large refectory windows.  Food not only for the body, but also for the soul.

The dining areas are flanked by reading and games areas and there are even dedicated areas for dances and cultural events.  In other words, the cafeteria facility was not only a place for people to have their meals and –in this place - the lunch break took on an entirely innovative and surprising significance that went well beyond that of a simple place to have a meal.  Indeed, in the immediate vicinity of the dining hall, workers had access to various zones designated for social and cultural services.  From lunch venue to enrichment facility (prior to the elimination of the traditional “long- lunch break in the early Seventies, workers were entitled to take a lunch break lasting almost two hours). 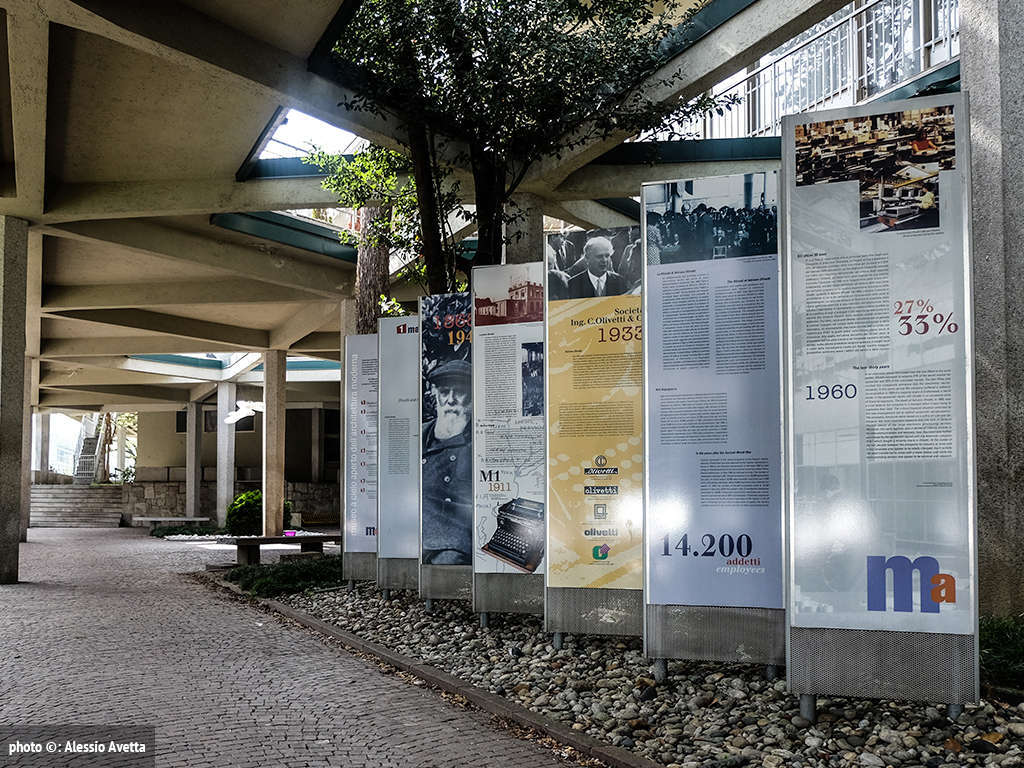 This block of four separate but interconnected buildings is vital in terms of understanding the business concept pursued by Adriano Olivetti.  Conceived as a public area and open to all the residents of Ivrea and not only to Olivetti employees, the Social Services Zone was also destined to house a library, in addition to clinics and consulting rooms for the provision of healthcare and social services.

For a number of years, workers and their families were able to obtain medical care and treatment, free of charge, simply by going to this facility.